Shop OliveNation's wide selection of vanilla for home and commercial baking, cooking, brewing, or industrial food manufacturing. Ranging from top quality vanilla extracts in a variety of strengths to commercial grade vanilla beans, our ingredients are available in multiple size options including bulk commercial quantities for wholesale purchase. Vanilla is one of the most popular flavors across the world, and OliveNation vanilla ingredients allow home and professional chefs, bakers, and brewers to create the flavoring profile they want, using the form and formulation they need. Premium vanilla, such as pure extracts made from Bourbon Madagascar vanilla beans, has a taste and aroma unlike any other. Vanilla from other sources, such as Mexican, Indonesian, or Tongan beans, offers different flavor profiles and is often a more economical choice for bulk purchase for commercial food applications such as mixes, food service, and industrial or institutional use. OliveNation's curated selection of vanilla beans, extracts, emulsions, and flavoring agents offers a variety of options to meet the needs of any chef or home cook.

Wondering how to choose the right type of vanilla for your recipe? Understanding the different types of vanilla and what they are best used for can be challenging. Much like the relationship between grapes and wines, the flavor of natural vanillas is greatly influenced by not just the variety of plant, but the location in which it grows and the ways it is cultivated, harvested, and processed.

While there are only two main varieties of vanilla plants — Vanilla Planifolia and Vanilla Tahitiensis — there are more than 15 nations around the world that produce vanilla beans for commercial use. Of the two varieties, Planifolia offers a stronger flavor with deep, earthy notes while Tahitiensis has a more subtle flavor with floral notes. However, the final flavor of any natural vanilla will depend on where the beans are grown and how they are harvested and processed for use. A third variety of vanilla, Vanilla Pompona, grows natively in Mexico and South America, but is very rare. OliveNation offers a selection of different vanilla products for sale, including beans, extracts, and flavors, from Bourbon and Tahitian varieties grown in a number of different locations:

Tonga is an archipelago of 170 islands located in the southwestern Pacific Ocean. Officially known as the Kingdom of Tonga and sometimes called the "Friendly Islands," Tonga's environment includes both semi-tropical and tropical climates. The lush climate and fertile soil give Tongan Vanilla a deep, unique flavor profile that is both fruity and floral. Undertones of red wine, cherries, and figs allow Tonga Vanilla to match well with strong, bold tastes in sweet or savory recipes, and make it a great choice for use in chocolates and caramel-based desserts.

Indonesia's vanilla has a flavor that is uniquely enhanced by the growing conditions and curing techniques of the region. The vanilla pods produced in Indonesia have an earthy, woody taste with a hint of smoky flavor and aroma that is balanced by slightly floral sweetness. Undertones of raisin make Indonesian vanilla a great match for chocolate, particularly dark chocolates, as well as for other strong flavorings such as licorice/anise and caramel. This variety's smoky, deep notes and rich, sweet taste are ideal for adding balance to both sweet and savory dishes. In addition, a curing process that is unique to Indonesia means that their vanilla offers increased heat stability, allowing it to be added earlier in the cooking process without losing flavor.

The island of New Guinea is the second largest in the world and is home to two separate countries: the Independent State of Papua New Guinea on the eastern half, and Western New Guinea, which is part of Indonesia, on the western side. Both the Planifolia and Tahitiensis varieties of vanilla are grown in Papua New Guinea, and the country's fertile soils give them special flavor profiles that differ from the same varieties grown in other locations.

Papua New Guinea Planifolia vanilla combines the classic buttery richness of Bourbon beans with a deep, caramel-like undertone that adds depth. This results in a sweet, creamy vanilla taste and aroma that is ideal for adding "classic" vanilla taste to desserts and savory dishes alike.

Tahitiensis vanilla from Papua New Guinea takes the light, floral taste of Tahitian-grown vanilla to the next level by boosting the darker fruity notes while retaining a strong, sweet aroma. The drying process used in Papua New Guinea creates a dark, almost black bean with a taste that is ideal for baked goods as well as traditional Polynesian seafood recipes and other savory dishes.

Although the Planifolia vanilla plant was originally cultivated in Mexico, Planifolia grown in Mexico is now called "Mexican Vanilla" to differentiate it from the same strain grown in other countries. The curing process in Mexico involves smoke drying for a longer period of time than in other countries, and helps give Mexican vanilla its distinctive look, aroma, and taste. Mexican-grown vanilla tastes more woody, earthy, and spicy that other varieties. Undertones of tuberose, cinnamon, and cocoa make this a perfect choice to complement dark chocolate, savory, and spicy flavors. The deep, earthy and woody taste is a classic component in traditional regional recipes - from sweet flans, cakes, and breads to spicy chili and barbecued meat dishes and sauces.

Because less vanilla is grown in Uganda than in Madagascar, Indonesia, or Mexico, the beans produced there can be harder to find commercially. The taste, however, makes this variety well worth searching for, as Uganda vanilla has a unique flavor and aroma. Vanilla from Uganda has a bold, earthy flavor with undertones of creamy milk chocolate, making it a great choice for flavoring baked goods like cake, cookies, and cheesecakes, creamy desserts and beverages, and ice cream.

The "Bourbon" in the name of this intensely popular variety of vanilla comes from the name of where it was first introduced, Ile de Bourbon (an island named for the ruling dynasty in France at the time of its colonization and now known as Reunion) in the Indian Ocean. This variety is so immensely popular that when people talk about the taste and smell of vanilla, what they are talking about is the taste of Planifolia grown on Madagascar and nearby islands.

Madagascar Bourbon variety vanilla is complex and sweet, with a deep, buttery flavor and aroma with a hint of dried fruit. It is most often described as tasting creamy, rich, and full-flavored. Floral notes and undertones of raisin help make this one of the most popular varieties worldwide. Pastry chefs and bakers appreciate how Madagascar vanilla balances with almost any other flavor profile, without overwhelming. It is particularly effective with fruit and egg-based recipes.

French vanilla, strangely enough, does not refer to vanilla grown in France, or even to that grown in former French colonies such as Tahiti. The term "French vanilla" was originally used to refer to vanilla ice creams and custards made in the traditional French method of using an egg custard base. The addition of egg made the ice cream taste richer and creamier than other vanilla ice cream or custard. Over time, French Vanilla became a flavor on its own, and tastes like an extra-creamy vanilla with caramelized, custard-like notes and a deep, rich aroma.

What type of vanilla-based flavorings do you have?

Why is Vanilla So Expensive?

Producing premium vanilla is a long, labor-intensive process. It may take up to five years for a single vine to product vanilla pods, and outside of Mexico, every vanilla plant must be pollinated by hand. Once harvested, premium vanilla beans cure in the sun for 4 to 6 months before being processed. In addition, weather can have a significant impact on the quality and amount of vanilla produced in any given location.

Do You Sell Vanilla in Bulk?

OliveNation carries an extensive stock of vanilla beans, extracts, and flavorings to meet the demands of home and commercial customers. More than 90% of our products are available in large sizes. We cater to wholesale purchases and bulk orders.

What is the Difference between Pure Vanilla and Artificial Vanilla?

While there is no true substitute for a high-quality vanilla extract made with water, alcohol, and the finest vanilla extractives, many professional cooks and food manufacturers prefer artificial vanilla flavoring, as it is easy to produce consistent results and can be more cost effective at scale. 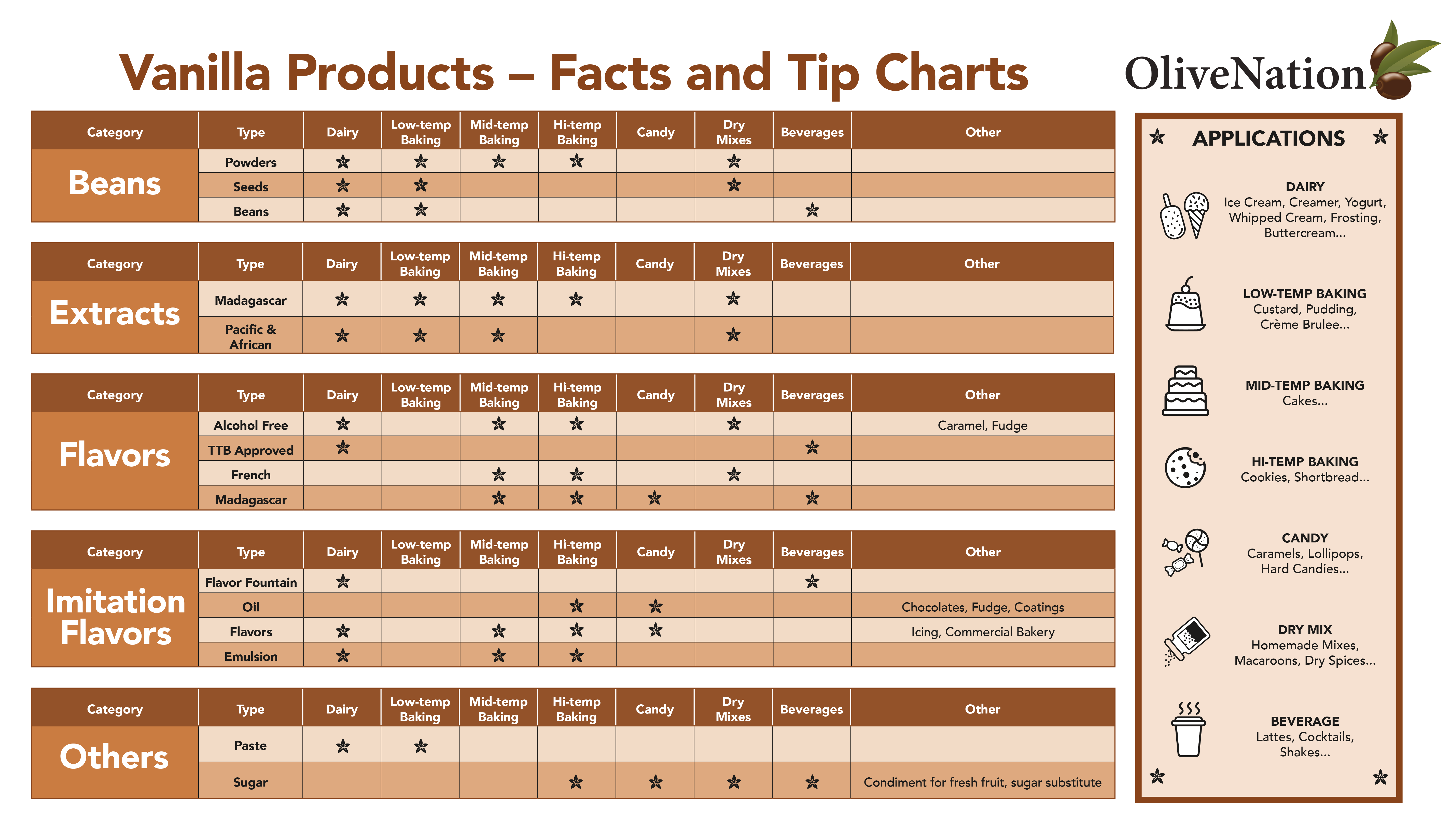